Images 1 - 20 are photographs from within the Petrie Museum archive collection. In most cases the images are accompanied by extracts from Petrie's journals and publications, either from within the museum or from the Griffith Institute, Oxford.

Journal extracts are courtesy of the Griffith Institute, Ashmolean Museum, Oxford and their permission to publish on this site is gratefully acknowledged.

We won't display all this information in the exhibition!

Please feel free to comment on the photographs - we would like to know what you think about them in terms of the history of photography, art history, excavation and archaeology and anthropology. We then hope to use these comments in the exhibition.
Posted by Debbie at 07:48 1 comment: On the tomb-chapel where Petrie lived (Drower 2004: 14):
“We reached the Pyramid about 10; a lovely morning with delicate mare’s tail sky, and the pyramids, one side warm with sunshine, the other grey blue with slight haze. I then looked over all the tombs available; the Arab village has been moved since C.P.S. was here, and his tomb is no longer to be had. Weyman Dixon’s is however all ready to go into, Ali having the key and door and 2 windows perfect. So I decided to take that, at least for the first.” 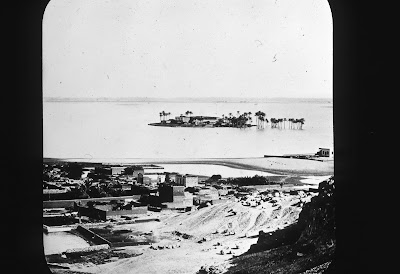 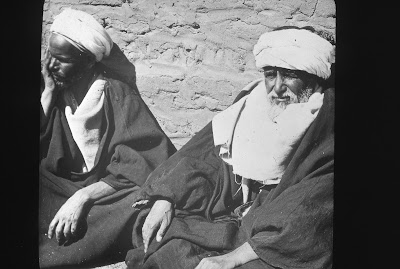 “I saw Smyne who showed me his testimonials, and wanted to know if I required a cook; also an old Sheikh Omar about whom Ali shakes his head; he has some testimonials, but he is of no authority here, and only hovers about to deal in antiquities, both genuine and largely otherwise.” (21.12.1880)
Posted by Debbie at 07:44 No comments: 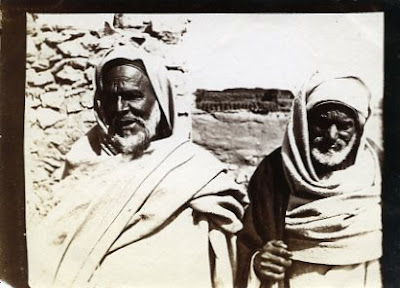 Of his first dinner with Grant, on Saturday 18th December 1880, Petrie records:

“He considers it quite safe to go and settle in with Ali Gabri (not Dobree as C.P.S. writes it) as head-man, giving the shekh occasional bakksheesh fully £1 a month, but no great lump at last: they are too much head to mouth to do that. He says, as Highet said, and Baedecker also, that there is no chance of a raid, still less of personal violence, that even nothing large would be ventured on, or any regular stealing, but only appropriation of trifles and attempts at imposition; and that Ali would be above that, as C.P.S. says. He told me that some of the Pyramid Arabs are nearly every day in Cairo; so often, that it is not worth while to go out there to find Ali, as he might be out; I therefore, as he recommended, went to the Oriental Hotel and to Shepherd’s and asked the door attendants to send any of the Pyramid Arabs they might see to Dr. Grant; and he will get Ali Gabri over to his house, and there make a personal settlement with him and me.”

“there stood Ali Gabri with a card from Mr. Grant, saying that if I would come with him to the Dr’s we would settle matters. So off I started, and chatted to Ali on the way; he speaks very fair English, and though no beauty he has a very pleasant and trustworthy face, looking calm, simple, decided and straight forward, a man whom I would trust without a recommendation; and considering the excellent character given him by C.P.S., Weyman Dixon, Mr.Gill, and Dr.Grant, I felt every confidence in him.”
“I had written out all that I thought necessary to settle, and Dr. G. took my paper and talked over each point with Ali Gabri in Arabic. Ali saying that regular Bakhsheesh to the shekh was quite unnecessary, only giving when any special service was required. Having settled it all, and engaged Ali at £1 per week from that time forward, (he saying that he did it for love of Mr.Smyth and Mr.Gill and not for the sake of money) we then left.”

“I then looked over his testimonials, which he was anxious I should see; they speak of him in even higher terms than I had heard before; C.P.S., Dixon, Watson, and Gill, and another traveller who took him up the Nile, all agree in his great intelligence, scrupulous honesty and protection of his travellers from any imposition, and his gentlemanlyness and companionability. From my talk with him this evening over coffee, I can only say that his manners are those of a perfect nature’s gentleman, and one feels that the same delicacy and politeness is due to him that one would use to any gentleman.”

“I then came back home to supper, and had a chat as usual to Ali. We talk on astronomy, navigation, constitutional government, etc, in a fashion that would make anyone laugh” (23.12.1880).
Posted by Debbie at 07:41 2 comments:

Images 5 - 9 are photographs taken by Petrie himself from his excavations in the Delta when he worked for the Egypt Exploration Fund and when he was freelance.
Posted by Debbie at 07:40 No comments: 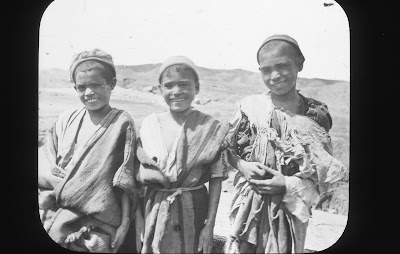 On age:
“The best age for diggers is about 15 to 20 years. After that many turn stupid, and only a small proportion are worth having between 20 and 40. After 40 very few are of any use, though some robust men will continue to about 50. The Egyptian ages early; and men of 45 would be supposed to be 65 in England. The boys are of use for carrying from about 10 years old; and they generally look mere boys till over 20. The ornamental man with a good beard is quite useless and lazy; and the best workers are the scraggy under-sized youths, with wizened wiry faces, though sometimes a well-favoured lad with pleasing face will turn out very good (Fig.13). In choosing boys the broad face and square chin are necessary tokens of stamina; and the narrow feminine faces are seldom worth much”. (Methods and Aims, 1904: 20-21)

“In European countries this use of boys is scarcely possible owing to the national education. In Greece as in England the boys are required to go to school, and their holidays there are not at a time suitable for excavating, while in England the holidays are occupied by the harvest” (Methods and Aims, 1904: 32).
Posted by Debbie at 07:39 1 comment: