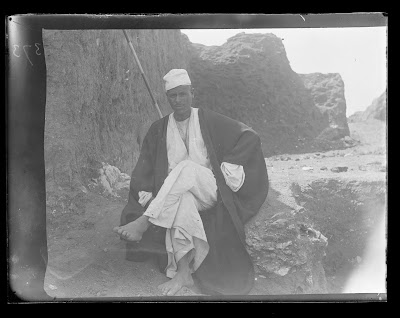 “I must not conclude this without acknowledging what is a necessary part of my facilities for work, the characters of my overseers. By continual selection and weeding, I have now three or four men whom I respect and trust more, the better I know them. The three brothers – Mahajub, Said, and Muhammed –abu Daud el Gabri have proved unequalled for sturdy independence, unceasing goodwill and kindliness, obedience, and readiness for any service, asked or unasked; while Tulbeh, their little cousin, promises to be quite their equal. Though they never stand between me and my workers in any matter, yet it would be impossible to maintain such a good spirit and straightforwardness in the work with men inferior to my good friends.” (Petrie 1888: 3)

“He suggests that I could have two elder brothers of Muhammed; and as he did not wish to leave home at present, Abu Saud his son would go also. This is just the sowing time when the land has to be attended to, and so he wishes to stop and look after his crops now; but probably he will go later on with me when I go to the San district. Next day Ali came in to Cairo, and said that I could have Abu Saud, and Muhammed and his brothers; so I offered 4 piastres a day (10d) as before to Muhammed and the others, and double that to Abu Saud, considering that he can read and write Arabic. Of course I should not give the same as to Ali (21 piastres a day) as he has not any experience, and knows nothing of English or antikas. Two days later Muhammed came in to Cairo, saying that they were all coming on those terms. He seemed delighted to come again with me. My staff will now be Abu Saud, Muhammed abu Daud, Said abu Daud, and Abd es Salam Abdullah. None of them know more than a stray word or two of English so if any insurmountable difficulties should turn up I shall march all parties to Tel Barud station and get the station master to settle them, as he speaks very good English.”
Posted by Debbie at 07:35